Our Newsroom is a place to check out the latest news, updates and insider tips about building a custom home from Goehring & Morgan.

What used to be a gym is now a fancy home theater that converts to a golf-simulation playground with the press of a button on an Elan home-automation system. 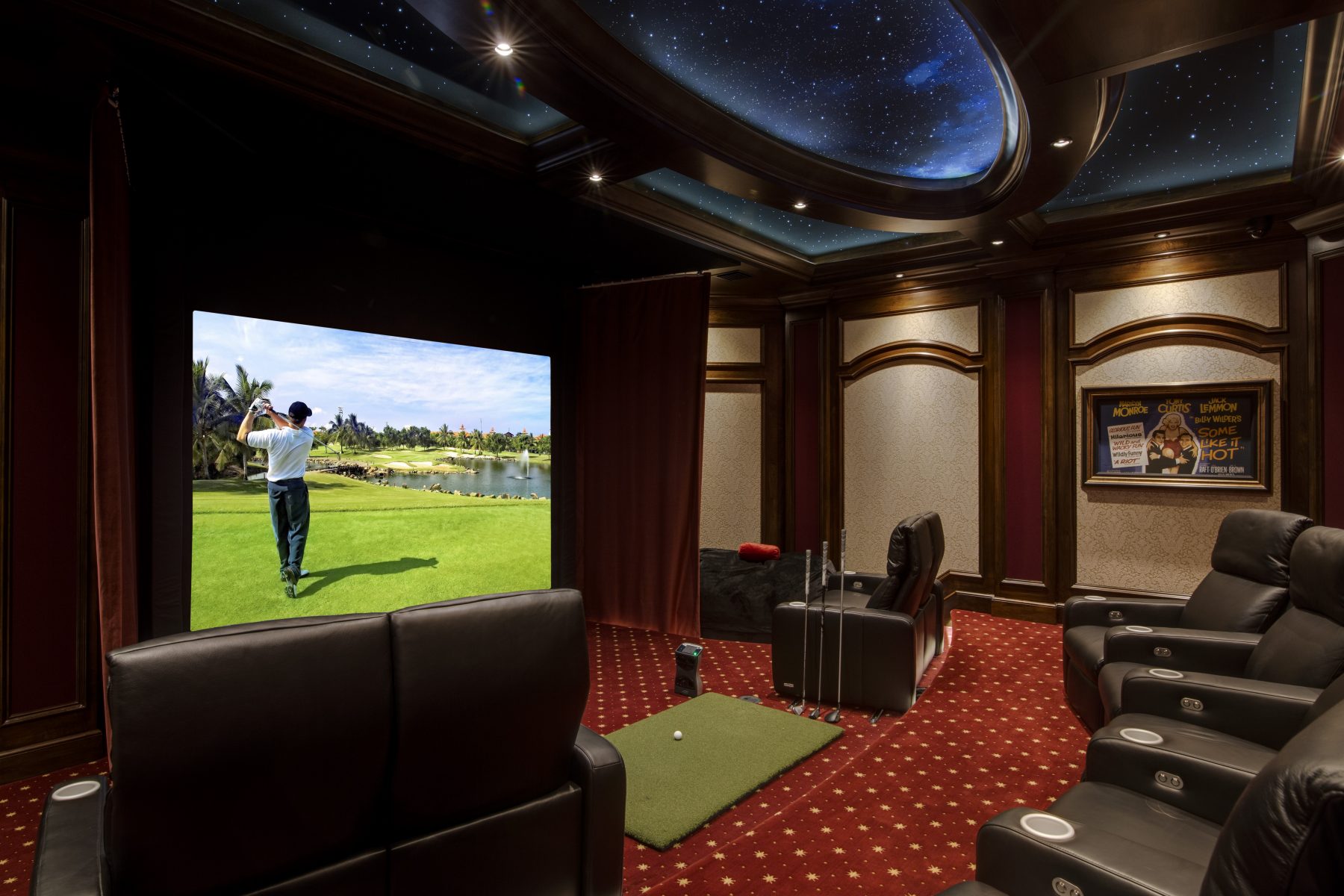 Why have two separate rooms for a home theater and a golf simulator when you can combine them into one? That was homeowner Sebastian Mascaro’s thinking while renovating part of his 7,000-square foot home in Kissimmee, Florida. To make his dream a reality, Mascaro reached out to local integration firm Millennium Systems Design (MSD) to turn his former home gym into a dual-functioning entertainment room that can change from a home theater to a golf simulator, and back, with the touch of a button.

The system was complicated, says MSD president Michael Barry, but it all appears simple to the homeowner thanks to an Elan home-automation system.

“Elan is very user-intuitive,” Barry says. “Despite how complicated the integration is on the back-end, the system enables Sebastian to change the room with no effort at all.”

MSD installed one Elan gSC10 Controller paired with an Elan g1 Controller to anchor all of the home theater and golf simulator technology, accessible through an Elan gTP7 in-wall touchpanel, Elan gHR200 remote, and the Elan Mobile app on his smart phone.

The sophisticated system was configured into two simple modes: “home theater” and “golf simulator,” both of which incorporate screens, motorized shades, lights, projectors, decorative displays, and speakers that turn on or off automatically.

The application called for two separate screens. After all, you don’t want to keep bashing your home theater screen with golf balls.

“A golf simulator needs at least a foot of space behind it so that the ball can hit the flexible display and bounce back on the floor,” Barry explains. “Meanwhile, a home theater screen needs to be sturdy to support 4K content.”

For the golf simulator, MSD installed a floor-based short-throw projector that sends the image upwards onto a semi-porous screen. The approach eliminates the possibility of shadows created by a golfer.

For home-theater mode, MSD installed a 138-inch custom Vision X motorized screen from Vutec that drops down immediately in front of the golf screen.

In this mode, the short throw projector shuts off, and a Sony 4K SXRD home cinema projector drops down at the back of the room from a scissor lift. Two 40-inch Sony TVs flanking the screen then display old movie posters of films like “Some Like It Hot.”

“It’s quite amazing how everything happens at once,” Mascaro says. “When I click ‘home theater’ on the Elan app, the theater screen comes down, the lights dim, the speakers power up, and the movie theater posters appear. When I click ‘golf simulator’ mode, the theater’s motorized screen lifts up, the golf simulator turns on, and all of the room’s motorized shades open to show the greenery outside. The mood totally changes along with the designated function.”

“Sound is a huge component of creating a realistic home theater,” Barry says. “Details and acoustics were put into it to create a true theater experience. Sunfire is the strongest subwoofer with the smallest enclosures.”

To protect the investment, MSD installed two Furman PL-PRO DMC 20A Power Conditioners, according to Barry: “With every client, we always stress to protect the equipment rack with Furman power conditioning, especially when the functionality of the room is entirely contingent on how well the products work. It’d be a shame if ‘dirty’ power was responsible for glitches after Sebastian invested in the best-of-the-best.”

During the five-month renovation process, MSD worked closely with Bo Morgan of the building company Goehring and Morgan to transform the space from an exercise room into what it is today.

“It was a unique experience to retrofit a room previously built to be a home gym,” Morgan says. “Despite the challenges we faced during the re-design process, MSD was an absolute pleasure to work with.”

The builder addds, “It’s becoming increasingly important to implement smart automation at the onset, during the building process, to maximize how it can be used to better the home-owning experience.”

Mascaro is thrilled with his new entertainment room, which integrates with the rest of the home’s Elan automation system for complete control of the property’s lighting, climate, irrigation, audio, video and security.